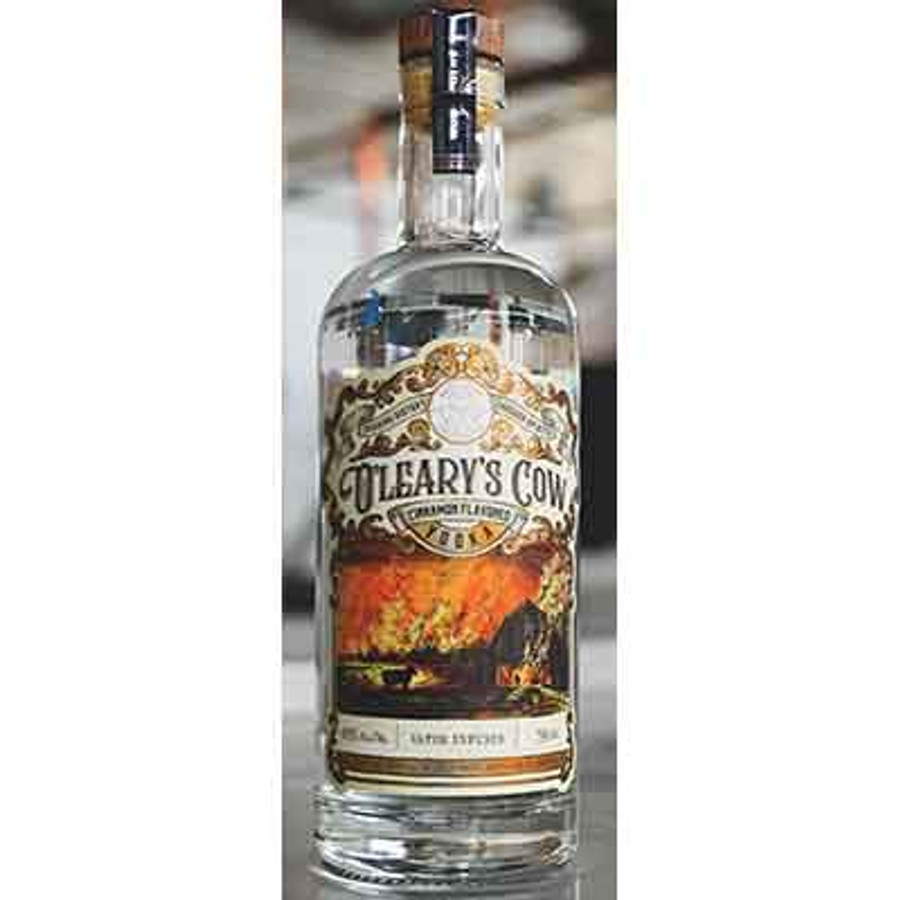 Distiller's notes: (label) "At first glance, you’ll see the silhouette of Daisy standing next to the barn where the fire began, with the city in flames in the background. A lantern is tipped over in front of the barn with Daniel “Peg Leg” Sullivan sneaking around inside.

"As urban legend has it, the Great Chicago Fire of 1871 was started at night by Catherine O’Leary’s cow, Daisy, who kicked over a lit lantern. The family’s barn caught fire, and dry weather conditions paired with high winds led the fire to spread rapidly throughout the city, spreading over 73 miles.

"The O'Leary's were woken up that night by their neighbor, Daniel “Peg Leg” Sullivan. He insisted he yelled “fire!” several times and immediately rushed over to free the animals in the barn. Yet, an alternative theory exists that perhaps it was Mr. Sullivan who unintentionally started the fire.

"He became a probable suspect throughout the years as he was the first to become alerted to the fire and had noticeable irregularities in his statement to the authorities. One inconsistency was his ability to rush over to the barn to free the animals. His wooden leg restricted his movement, and his physical ability to make it to his neighbors that quickly from his home was extremely unlikely. The property deed showed his home was over 200ft away. Furthermore, no one in the neighborhood could ever verify they heard someone yell “Fire.”

"Peg Leg was only questioned the one time, despite the anomalies in his story. Some historians speculate that Peg Leg was already in the barn, looking to take milk to mix up a batch of whiskey punch when he mistakenly knocked over the lantern. Since he was already on the property, it explains how he was able to immediately free the animals and alert the O’Leary family.

"There are alternative theories as to what caused the fire and to this day there is no clear answer. Catherine O’Leary and her cow remain the most popular.

"In 1997, over 100 years later, the Chicago City council exonerated both Catherine and Daisy. Today, The Chicago Fire Department training academy is located where the O’Leary’s property once stood."